All About Cocker Spaniels

This page will help you understand more about the breed, its history, original purpose. This information is provided purely for your own education however if you plan to become involved in Breed Showing, you need to read and start gaining an understanding of the New Zealand Kennel Club Breed Standard, as this is what a judge assesses each dog in the show ring against.

A big hearted little dog whose merry temperament is legendary. This temperament lends itself to a sensible training regime; Cockers respond relatively quickly, they DO NOT, however, respond to harsh training methods. Cockers love long walks, swimming, children, chasing balls, cuddles, rides in the car, good food (don't over do it) and toys, they dislike teasing, taunting, rough handling, being untidy and unkempt.

The Cocker Spaniels beautiful silky coat with long feathered ears, chest, belly, legs and pants does require regular attention, if you do not have time for this a regular 6-8 week visit to a  groomer is recommended. Comb him at least once a week, special care is required around the ear canal keeping this area free from of hair to assist ventilation. Don't feel you have let the side down if by having your Cocker completely clipped off for summer its much cooler for him and makes swimming much more pleasurable. A Cocker Spaniel requires a moderate amount of exercise although he would probably run all day a “fetch the ball” work out or a walk in the park or on the beech will generally satisfy his requirements.

English Cocker Spaniels may be many coat colours. They may be parti-coloured, with patches of black, liver, red, orange, or gold against a white or roan background. "Roan" is when the white background is lightly to heavily speckled or mixed with hairs of a colour listed above. Roan colours are common in English Cockers, while relatively rare in other spaniels. English Cocker Spaniels may be solid colours of black, red, liver, and golden; or any of the above colours accompanied by tan points on the eyebrows, muzzle, throat, rump, and feet. Cocker Spaniels have a medium coat length that required regular attention.

Prior to the 17th century there was no distinction amongst spaniels, whether they were large or small, long bodied or short, fast or slow on their feet.

Gradually the marked difference in size began to impress those who used them for hunting, with the result that the larger dogs were used for springing game and the smaller ones hunting woodcock. Hence the two names developed Springer Spaniel and Cocker, or woodcock spaniel, and in 1892 The Kennel Club (England) officially recognized them as separate breeds. This is the English Cocker Spaniel.

Originally Springer’s and Cockers were born in the same litter, with size alone dividing them. They enjoyed the same heritage, the same colourings, the same hunting skill and much of the same general type.

In 1940 the Canadian Kennel Club recognized the English Cocker Spaniel as a separate breed, as did the AKC in September 1946. Not until January of 1947 did breed registrations appear in the Stud Book under their own heading.

Many breeds have a male dog to which all modern-day members of the breed can be traced. In the annals of the English Cocker Spaniel that dog's name is Obo. The son of a Sussex spaniel sire and a field spaniel dam, Obo was whelped in 1879.

I've picked up 2 really interesting books about cockers one mostly about them in America and the other is about them in England, both quite informative with heaps of kennel history. 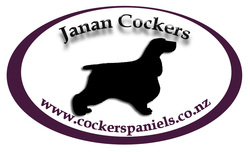